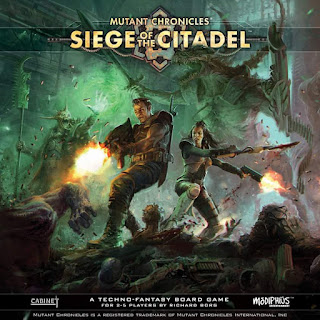 Well it's official! Siege of the Citadel is gearing up for a KickStarter!

Link to the official propaganda:


http://www.modiphius.com/modiphius-press-releases/siege-of-the-citadel-revealed
Posted by Unknown at 9:10 PM No comments:

Siege of the Citadel Nostalgia

So it's been a few months since I've decided to update this blog. Got caught up in the whirlwind of daily life. Haven't had much hobby time lately but I hope this will change soon enough.

So enough about me, let's see what's going on in the gaming world today!


The Siege of The Citadel announcements are going to kick in soon starting with the unveiling of the box cover - who still has the original box?!
Posted by Mutant Chronicles 3rd Edition Roleplaying Game on Tuesday, March 8, 2016

Yes! Siege of the Citadel (SotC) relaunch by Modiphius!

I have many fond memories of this game. Me and my friends used to play it constantly during our university years. I must admit to my shame that I even missed some classes to play it... It was also this game that introduced me to the hobby of miniature painting and to one of my favorite RPG settings, the Mutant Chronicles.So yeah, nostalgia and interest play a great deal in my present hype for the reboot of the classic boardgame.

BACKGROUND
Before I get into explaining Siege of the Citadel (SotC), I'd have to give you a big fluff course on the setting which would take up about 2 times the time I'm willing to put into writing this so here's the background in broad strokes:

Mega Corporations in their thirst for expansion, have opened a gate to a dark beyond. Now humanity is besieged  by creatures of nightmare and fight not only for profit but for it's very soul. In a desperate attempt to stop the flood of abominations, the Mega Corporations pool their resources and create the Doomtroopers, an elite cadre of soldiers responsible bringing  the fight to the darkness.

SotC follows five teams of Doomtroopers from each of the Mega Corporations as they try to complete their mission objectives in the assault of one of the Dark Soul's Citadel, thus the name.

RULESET AND GAMEPLAY
SotC followed certain aspects of the HeroQuest boardgame, in that the gameplay was centered around a certain narrative. The game came with a mission booklet that represented the various missions that the teams of Doomtroopers could accomplish. The missions could be played one after the other in a linear fashion to give the impression of a developing narrative. The game also integrated certain aspects of RPG as the each players Doomtrooper team mustered experience points in defeating enemies that could then be used to upgrade their efficiency in combat. If players achieved their mission objective, they received credits that could then be used to buy equipment to boost their stats or give special effects.

The mechanics of combat where fairly simple. Each player controls a pair of Doomtroopers representing one of the five Mega Corporations. Of the pair, one is a long-range weapon specialist while the other is close combat. Each combatant could use 2 actions per round which they could use in any order to move, attack or interact with their environment. Each Corporation came with a special ability that broke the normal rules in a certain way; giving additional actions, adding dice to armor saves or long range attacks and other such things.

MY BEST FRIEND MY ENEMY,
The real difference of the game compared to other competitors at the time was the tension in Coop and PvP. This mechanic was central to the whole of the game. Although players won and losed together, they competed for kill points as the player with the most promotion points (XP points) won the game. This enticed the players to take risks in order to take the lead.

There was also a mechanic of special cards that could be used against the bad guys or against other players. This created tense moments when you tried to determine if you could get away in throwing a spammer in the plans of another player or use the same card to give you a bonus in fighting the bad guys. At the time, this was a novel idea. Since then, many other boardgames inspired themselves of this rule design of asymmetric collaboration.

The real deal for us though, was that the bad guys changed after each mission. If the player responsible for the bad guys did a good job and prevented the others of realizing their objectives he would receive additional points to purchase equipment. So everyone could play in the hot seat and relish at exterminating other players.

WHY TO BE HYPED :
So beyond my raging nostalgia that does nothing to sell you the game, why should you be hyped at this new reboot. Here's a few reasons why:

-MODIPHIUS:
Since it's successful launch of  Atchung Cthulhu, Modiphius has been branding it's name in great big letters in the gaming industry. Having part taken to some of their kickstarters, I can say that they deliver quality products and within the timelines determined in the kickstarter.

Chris Birch and his team are quick to answer questions and comments and are quite efficient in keeping their backers in the loop.

-DREAM TEAM:
If this does nothing for you maybe the talent that Modiphius has brought to this project will.

Rule Team:
Script and Narration:
Artwork:
Sculpt:
Paolo Parente: Known game designer and artist. He'll be responsible for some part of the design of the boardgame
- Gael Gaumon, Valerio Terranova: Don't know much about these guy's work but from what I've saw on the web, they seem to know what they're doing.

Lot if talent has been pulled for this project. This means that Modiphius has big plans for this product. I personally can't wait to see what surprises they'll be bringing at the table.

Finally, as a thank you for suffering my ramblings, here's some sexy pictures of painted miniatures for the original Siege of the Citadel that I've painted.

Posted by Unknown at 9:48 PM No comments: 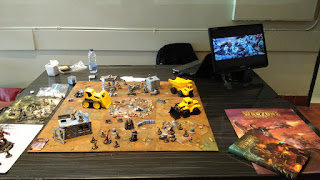 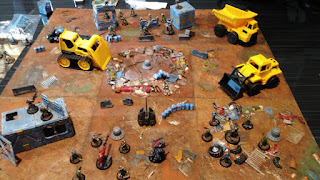 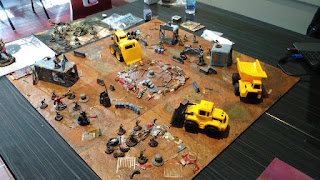 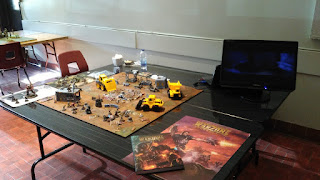 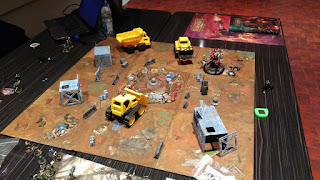 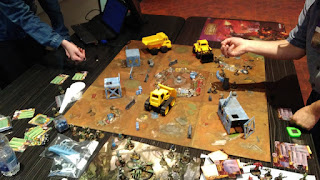 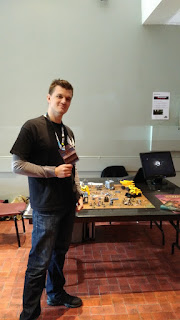 Posted by Unknown at 8:33 PM No comments:

Reinforcements for the Dark Legion

So September has come and gone and October is halfway done. Haven't had as much hobby time in the last weeks for various reasons.
Still I've had time to slap some paint onto some nice miniatures for Warzone.

This big guy was a staple of the old edition. Prodos did a really nice job in updating him to new standards of miniatures.
My version being from the KickStarter, I've had to contend with quite a lot of mold lines and bubbles. The torso was most problematic. I had to fill the gaps between the legs and torso with green stuff.  I've managed to patch most of him up before priming.

I'm quite pleased on how it came out. Making the base was fun. One of the good thing about how Prodos prints their minis is that the mold can be used for various other functions such as on this base.

In-game the Behemoth piles the hurt. His unstoppable mass ability lets him charge through allies, enemies alike, sending everything flying left and right! He can also seize terrain and throw it at the enemy for massive damage. All that is in addition to a BFG and the capacity of throw some nasty grenades that can incapacitate your opponent troops . 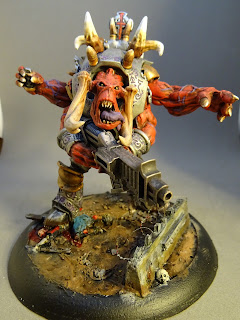 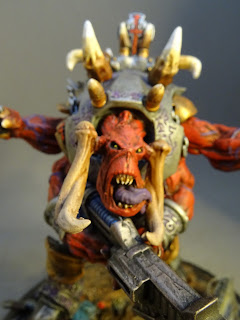 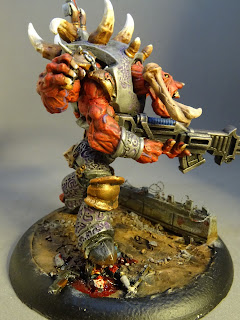 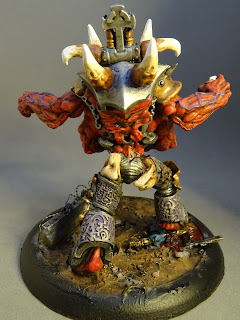 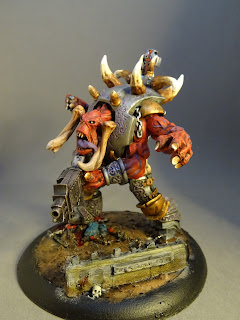 
The stalkers are a support choice. They have an ability that let's them accumulate bonuses depending on the amount there are on the table. They have many equipment options which make them extremly flexible to the type of strategy you want to use.

The minis where ok, but I only wanted to finish them rapidly to proceed to other projects. Had some issues with the hands that needed a dunk into hot water to get fixed. In that respect, Prodos resin is great, since it can be manipulated the way you want with a hot and cold dunk. This lets you modify your guys a bit. 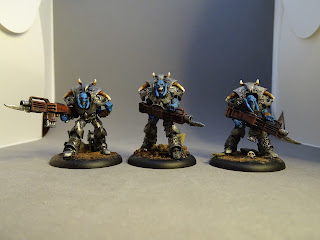 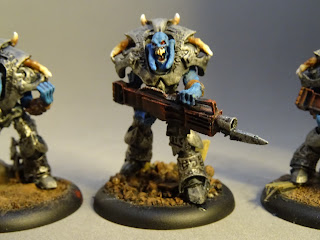 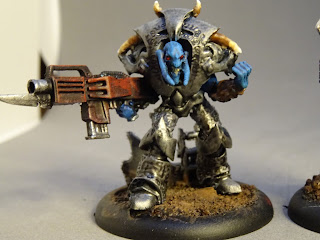 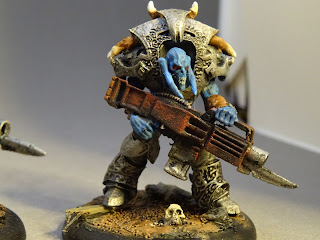 Got more pictures from the rest of my Dark Legion demo army coming soon (tm) so stay tuned!

Posted by Unknown at 4:45 PM No comments: